TAKING PRIESTLY VOCATIONS TO THE ‘NEXT LEVEL’

Inspired in part by their own pastor’s story of conversion, the people of St. Therese of Lisieux Parish in Munhall are helping men respond to God’s call to the priesthood.

A convert at age 19 and ordained just 13 years later, Father Terry O’Connor credits the power of prayer in leading him to become a priest.

“There’s a tremendous amount of secularism out there, but Jesus can work through that,” Father O’Connor said. “Men need to take time in quiet prayer with the Lord to learn their vocation.”

Sacrificial gifts to Our Campaign for The Church Alive! are helping to take the promotion of priestly vocations to the next level. The non-profit volunteer board overseeing the donations has approved a grant to support expanded outreach.

Interest in vocations is on the rise in our region, according to Father Joe Freedy, vocations director for the Diocese of Pittsburgh.

“Two years ago, 40 men attended our Quo Vadis Days Retreat led by the seminarians; this year there were 80,” Father Freedy said. “Attendance at our Christmas discernment retreats has increased from 17 men to 25 to 32 over the past three years.”

The most visible sign of increased promotions in parishes are “discernment stations” featuring banners that pose the question, “Is God Calling You?” The stations are being installed initially in about two dozen churches, with the goal of placing them in all 200 parishes in the diocese.

The rise of secularism, hectic lifestyles and constant media stimulation can make it difficult to hear and understand God’s call. The Office of Priestly Vocations seeks to cast a wide net to find men who are considering this call and personally connect with them, believing that no one should discern alone.

At St. Therese, a vocations council carries that outreach to the community. In addition to hosting a discernment station, the parish brings in speakers to talk to students, promotes vocations in Mass intercessions, and holds a monthly holy hour.

“Our message is that Jesus is still calling men to become priests and to the amazing life of living in the person of Christ and being Jesus to the world,” Father O’Connor said. “Priests walk in the footsteps of Christ in a special way to spread God’s love and salvation to the people.

“The greatest thing that the priest can do is to witness faith, hope, love and joy,” Father O’Connor said. “It causes men to stop and say, ‘I want to learn more.’”

“God has a perfect plan for each of us, and to the extent that we follow this plan we become conduits of God’s love around us,” Father Freedy said. “It takes a little more courage today to listen to Him and follow where He leads.”

To the donors of Our Campaign for the Church Alive!, Father Freedy expresses appreciation.

“Thank you for your generosity,” Father Freedy said. “A lot of people are making sacrifices. I’m really grateful to all who’ve responded with a love of priestly vocations.

“By the grace of God, we can fill our seminaries. There’s no doubt in my mind,” he said.

Catholic men who want to learn more about the priesthood are invited to visit PghPriest.com. 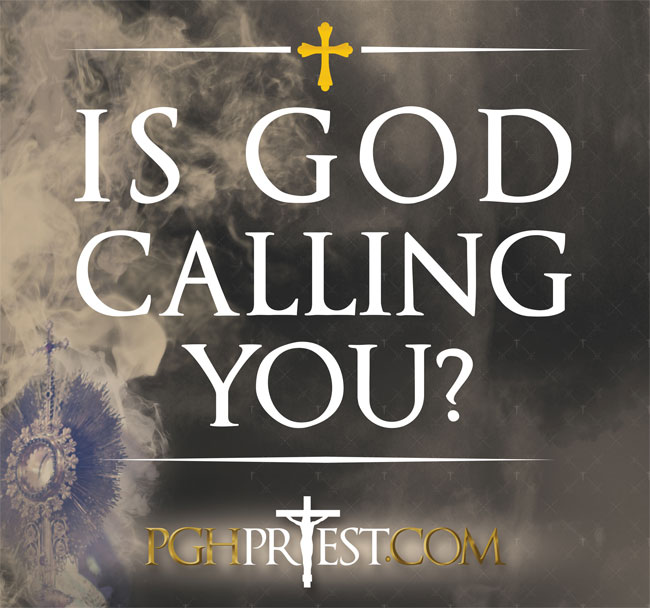 “By the grace of God, we can fill our seminaries. There’s no doubt in my mind,”