St. Alexis parishioners processed into their new church for a Dedication Mass on October 22, gazing around in wonderment, as if it were a dream.

It had been a dream, more than a half century in the making.

The church in Wexford is the fruit of sacrificial gifts given in three separate fundraising efforts, capped by Our Campaign for The Church Alive! It replaces a gymnasium building that was intended to be a temporary worship space when it opened in December 1962.

The campaigns, held over the course of 15 years, were led by St. Alexis’ longtime pastor, Father Paul Zywan.

“I wanted to challenge our people to think big for God,” Father Zywan said. “This new building is a testament to what we can do as church. It is the collaborative work of everyone.” 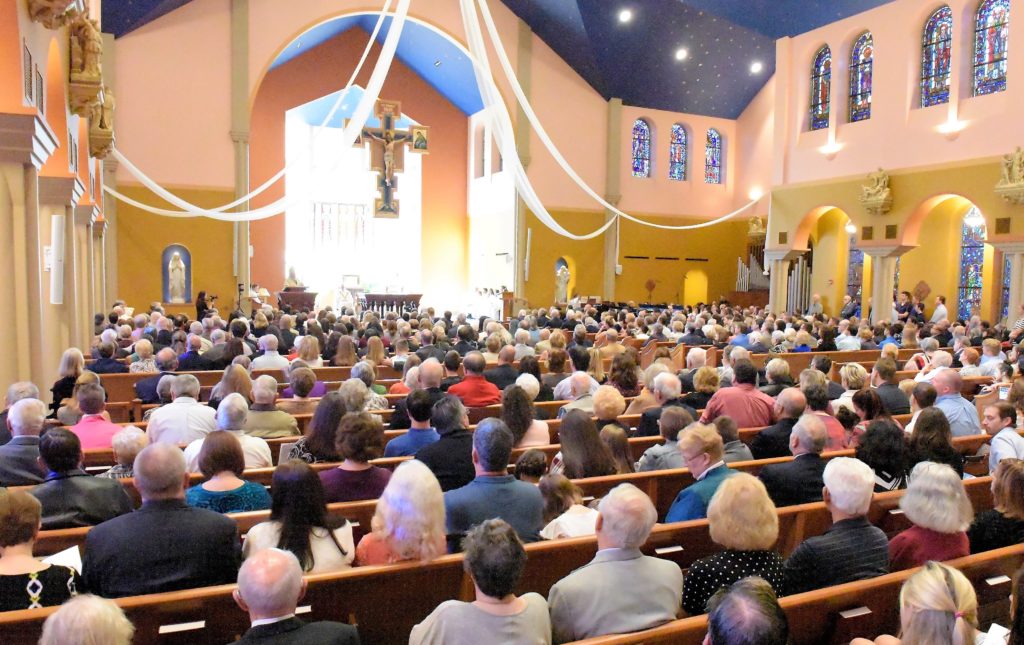 The traditional design, 900-seat church includes sacred objects from area churches that have closed: stained-glass windows from St. Mary Magdalene in Homestead and St. Gabriel the Archangel on Pittsburgh’s North Side, bells from St. Josaphat on the South Side, Stations of the Cross from St. Stanislaus in Ambridge, and statues from St. Stephen in McKeesport and Holy Family of Nazareth Motherhouse in Bellevue.

Bishop David Zubik remembers those particular three dimensional Stations of the Cross, having grown up at St. Stanislaus Parish and school. In his homily he recalled the lessons of his first grade teacher.

“Sister Estelle helped me come to know who Jesus was, and to remember that you are a temple of God’s presence,” Bishop Zubik told the overflow congregation. “Make sure that Jesus Christ is the foundation of our lives.”

“Our new church hopefully means we can fulfill the promise of bringing Jesus Christ to others and being transformed,” said Rob Dougherty, member of the pastoral council. “We have embraced the idea that the church isn’t a building.”

Tim Johnson, who helped raise funds in all three campaigns, reflected on the spirituality of giving.

“This church is a lasting testament to the faithfulness of God, to what His people can accomplish with great faith, and when our works match that faith,” Johnson said. “Thank you to all the donors, from the bottom of my heart.”

“I’m hoping this will motivate more people to develop a personal relationship with the Lord, especially those who have left the church,” donor Phil Ignelzi said. “The building is important, but we want to be a welcoming parish and bring people back.”

“This Mass was a moving experience,” said parishioner Dan Veres, who supported the Church Alive! campaign. “Having so many people participate in the liturgy in such a beautiful church impressed upon me that, indeed, the church is alive.”

St. Alexis Parish was established by Bishop John Wright on the site of the Milbert Farm. Led by founding pastor, Father Francis Rodgers, Sunday Mass initially was celebrated in the Pine Valley Roller Rink at Route 19 and Pine Creek Road. Weekday Masses were held in an old chicken coop that was converted into a small chapel.

Today, St. Alexis Parish is the spiritual home of more than 2,100 families and the site of the new Blessed Francis Seelos Academy Early Childhood Center.

At the end of the Dedication Mass, Father Zywan thanked all in attendance, especially the nearly 1,000 donors who helped make the dream of a new church a reality.

“Thank you for your trust and sacrifices, and for joining me in dreaming big,” Father Zywan said.

While other students were out playing sports or hitting the books on a warm evening at Slippery Rock University, 14 young men and women gathered to pray, study sacred Scripture, and share their Catholic faith.

The new Bible study groups are supported by missionaries with the campus outreach organization FOCUS (Fellowship of Catholic University Students), who spread the gospel message to young adults. Their goal is to get them engaged with their faith, so that they become disciples of Jesus and carry his love to others.

The evangelization effort at Slippery Rock, enhancing an active campus ministry program, is funded through sacrificial gifts to Our Campaign for The Church Alive! from donors across the diocese. The campaign is providing critical resources for On Mission for The Church Alive!, which has the goal of transforming parishes into centers of outreach to those who have not been active in the faith.

“People think the church is always saying ‘no’,” said Maria Petrarca, a senior from Madonna del Castello Parish in Swissvale. “They don’t realize our faith gives us so much freedom.”

Like Petrarca, classmate Kailyn Soros, of Fredonia, PA, grew up in a devout family but finds herself in a different culture. “Here at college I’ve taken my faith under my own belt and defended it,” Soros said. “I stand up for my beliefs.” 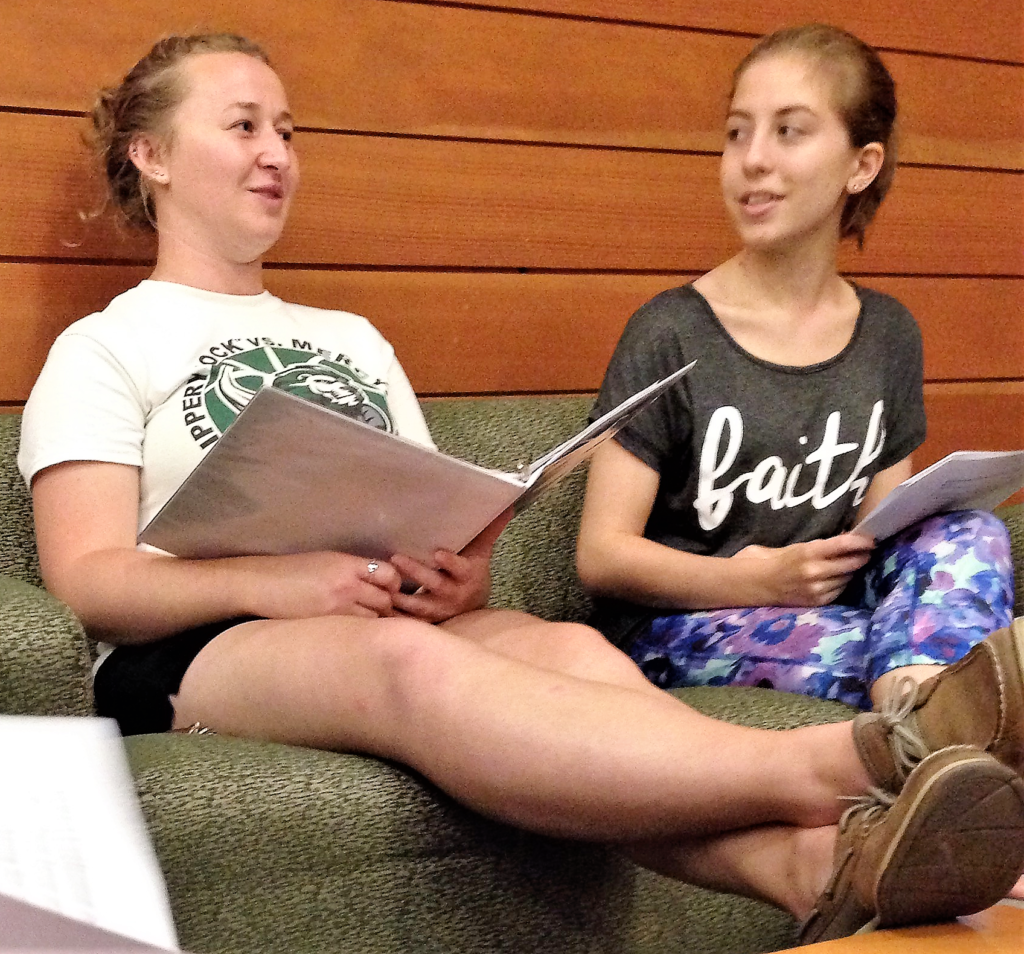 They are in the minority of young Catholics. A study from the Pew Research Center found that nearly 80 percent of those who leave the faith, do so by the age of 23.

FOCUS encourages young people to pursue truth and meaning in their lives, investing in relationships with Jesus Christ and their fellow students through Bible studies, mission trips, national conferences and further outreach.

“The FOCUS missionaries are showing the way,” said Gary Roney, director for adolescence and college ministry in the diocese. “Through the On Mission initiative, every parish should have a staff member who specializes in outreach to young adults.”

Ryan Ball, Ross Kerr and Spencer Vinroe could have been doing just about anything on a Tuesday night, but they wanted to be at the Newman Center on the edge of campus.

“We’re forming relationships based around Christ,” said Ball, a sophomore from Johnstown. “We’re growing in faith, knowledge and love.”

“It’s interesting to bounce ideas off each other,” said Kerr, a freshman who belongs to Christ the King Parish in Bessemer/Hillsville, Lawrence County. “This makes me a happier person, and keeps me centered and grounded.”

Jacob Grass, 24, is a third-year missionary with FOCUS, partnering with Thomas Mangan, 22, who just began his service.

“We build trust with the students,” Grass said. “We help them see what a real relationship looks like, so they can know what a relationship with God is like.”

“There is a spiritual hunger among the students,” Mangan said. “They have a craving, but they’ve never been invited to learn and share, and the culture holds them back.”

Rebecca Feldkamp, 24, is the FOCUS team director at Slippery Rock. She works closely with missionary Emily Ahlin, 22. Feldkamp agrees the key is relationships.

“Many young people don’t even know who they are,” Feldkamp said. “They have to first know that they are loved by God.”

Father Bob Seeman, director of Catholic Campus Ministry at Slippery Rock and administrator of St. Peter Parish, is grateful for the work of the FOCUS missionaries.

“It is my prayer that their witness and love for the Lord will guide students to a deeper level of discipleship and joyous relationship with Christ,” he said.

Diane Magliocca, the longtime campus minister at Slippery Rock, welcomes the FOCUS missionaries, who relate well to their fellow Millennials.

“Many students today aren’t as active in practicing the faith as the previous generation,” Magliocca said. “They lead busy lives, are affected by cultural pressures and are distracted by social media.

“But so far our students have responded well to the missionaries. There’s an authentic warmth.”

Founded in 1998, FOCUS missionaries serve on 137 university and college campuses, including the University of Pittsburgh and Carnegie Mellon University.