Hanging out on city streets can expose vulnerable young people to violence and drugs. Thanks to a growing street ministry, more teens are experiencing the saving love of Jesus.

As many as 40 teens attend weekly outreach nights led by Dirty Vagabond Ministries at St. Maria Goretti Parish in Pittsburgh’s Bloomfield, Garfield and Friendship neighborhoods. Up to a dozen youth join in worship nights and Bible studies, and two young men plan to formally enter the church next Easter.

Across the Allegheny River in Sharpsburg, Dirty Vagabond missionaries are in regular contact with about 20 teens. They met many of them at a local park, and just four months later they are gathering at the new Underground youth center at St. Juan Diego Parish.

Sacrificial gifts to Our Campaign for The Church Alive! helped provide start-up grants for the ministry, which embraces Pope Francis’ preference for “a church that is dirty because it’s been on the streets.” The “vagabond” reference is rooted in Jesus’ command for his disciples to go out by twos to meet and minister to those in need.

“There’s a lot of brokenness in these teens’ homes, including alcoholism and heroin use by adults,” missionary Ryan Ackerman said. “About 90 percent of them live with a single parent or grandparent.”

“There are a lot of fractured families with parents in rehab or in jail,” said Father Michael Decewicz, pastor of St. Juan Diego. “Sometimes, the least safe place for these kids is at home.”

“They’re yearning for a consistent presence of love,” said missionary Shannon Keating, who partners with Ackerman. “We try to show that we’re here to love them unconditionally.”

With strong support from other local pastors and civic leaders, the Sharpsburg missionaries began with barbeques, laser tag and trivia games. As they earned the trust of teens, they extended an invitation to go on a retreat. Soon they will offer “breakout nights” which include a faith message. Then there will be an opportunity to join discipleship groups and Bible studies.

Some young people are going to church regularly for the first time in their lives.

“Many of our teens went on evangelistic retreats last summer and fall,” said Christopher Kerfoot, who works with missionary Milan Chaump and adult volunteers at St. Maria Goretti. “Two teens even came with us on a mission trip to New Mexico to serve poor people living on a reservation.”

Members of both parishes have embraced the efforts. A core team of young adults and college students at St. Maria Goretti joins in the breakout nights, while another group assists with event planning, prayers and fundraising (see accompanying box).

“Praise God for the two young men who are going to be baptized and confirmed,” Kerfoot said. “It’s been a blessing to walk alongside them in our journey to heaven.”

The strong start in Sharpsburg “is really awesome and exciting,” Keating said. “To me, this isn’t just a job or a cool experience. I feel convicted by the call to action to go forth into the streets and make disciples.”

Fundraising is an important component of Dirty Vagabond Ministries (DVM), the only official Catholic charity of the Pittsburgh Marathon. For the eighth straight year, they are seeking marathon participants.

“Each year about 100 runners of all ages and abilities join us,” according to Andy Lesnefsky, director of mission advancement for DVM. “About half are relay runners, and the rest participate in the 5K race, the half marathon or full marathon.

Father John Petrarulo sat down in the new dining room at St. John Vianney Manor retirement home and looked around, taking in the scope of the newly completed expansion project.

“I’m impressed. The whole complex astonished me,” he said. “Everything is fresh, brightened up. It’s very inspiring.”

Sacrificial gifts to Our Campaign for The Church Alive! from donors across the diocese helped support the first major renovation of the facility on the campus of St. Paul Seminary in Crafton, since a third floor was added 37 years ago.

St. John Vianney Manor was rededicated and blessed on Dec. 11 by Bishop David Zubik after 11 months of construction.

“This place is a reminder of how much our hearts show our love for our retired priests,” he said. “The renovations are the result of much research, planning and especially the financial contributions of the faithful.”

Msgr. Bill Ogrodowski was one of 16 priests who remained in residence while the renovations took place. He described the experience as “challenging but bearable. Our shoes were always muddy.”

“I’ve been on this property since the early ‘60s when I was in the high school seminary, and I have seen it change so much,” he said. “The building (entrance) now faces the campus. We’re, in a sense, more fully integrated.”

Four residential suites were added for a total of 35. A new wing includes the dining room, kitchen, two lounges, an exercise facility and nurse’s office. Suites were refurbished with walk-in showers, new windows, flooring and paint. The temperature of every suite can be controlled individually, thanks to an updated heating and air-conditioning system.

The new facility is “comfortable and certainly necessary,” according to Father Philip Przybyla, director of St. John Vianney Manor. “Practically everything in the building was original, and the bathtub-showers were an accident waiting to happen.”

Built in 1961 as the residence of the Conventual Franciscan friars who taught at neighboring Bishop Canevin High School, the building was dedicated as a diocesan retirement home in 1980.

The need for priest housing is growing. The diocese has 99 retired priests, with many more expected to join them in the next several years as large ordination classes of the 1960s and ‘70s approach retirement.

Father Mark Eckman, episcopal vicar for clergy personnel, said the average age of retirement for priests in the diocese is 73. Thirty-nine priests still in active ministry are older than 70, and five are in their 80s.

“I looked at the service to the church of the 30 men who will be living here next month, and it adds up to 1,447 years,” said Father Przybyla. “Their service continues, with many still helping out in parishes by celebrating Mass and hearing confessions.”

For their part, Father Petrarulo and Msgr. Ogrodowski are grateful to the donors who helped make the dream of their new home a reality.

“I’m very appreciative that people sacrificed,” Father Petrarulo said. “They had to give up something in order to help take care of us.”

“When you ask people for money, it’s never an easy thing,” he said. “For all the parishioners of the diocese who’ve given, I say thank you from the bottom of my heart.” 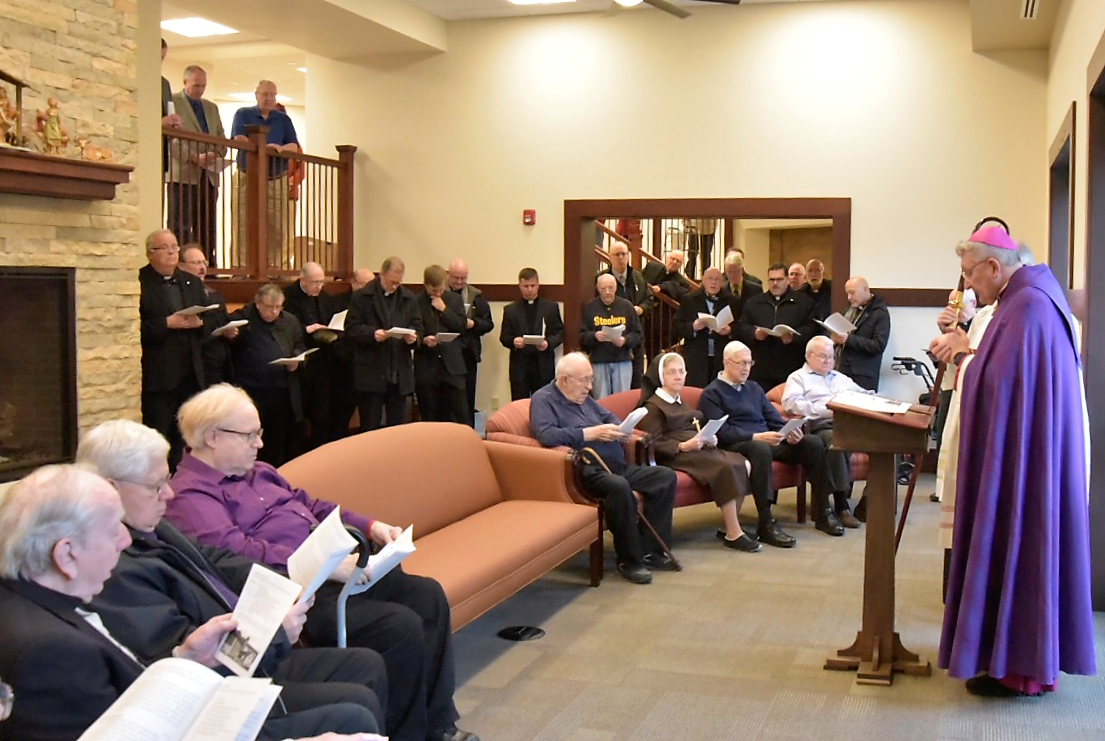 Brynna Sherony is so enthusiastic about her senior year at California University of Pennsylvania that she almost wishes she was beginning college again.

One source of her excitement is Meghan Larsen-Reidy, the new director of campus ministry at Cal U, Washington & Jefferson College and Waynesburg University.

“Meghan can definitely make a difference,” said Sherony, who helps lead the campus Newman Club called Cal ROCKS (Reaching Out for Catholic Kinship). “She’s interested in the students’ lives. It makes us feel valued, and she has amazing ideas for service projects and mission trips.”

Supporting the efforts of three chaplains, start-up funding for the campus ministry program is provided through sacrificial gifts to Our Campaign for The Church Alive! from donors across the diocese.

“My hope is to be a companion to the students in their formation,” said Larsen-Reidy, who previously served as director of religious education and youth ministry at St. Anne Parish in Castle Shannon. “Just being present is important, as well as inviting students to get involved.”

The college years are critical to keeping younger Catholics connected to the church. A study from the Pew Research Center found that nearly 80 percent of those who leave the faith do so by age 23.

Heading off to college is like “going from the passenger seat to the driver’s seat,” according to Gary Roney, director for adolescence ministry in the diocese. “Meghan can help advance the values that students receive at home. She is an energetic, dynamic person who wants to connect with as many people as possible.”

“Students are experiencing great freedom and independence,” Father Potter said. “They’re also seeking, and it’s important they get their identity right. In a world that emphasizes ‘doing,’ the Christian life emphasizes who you are in relation to God.”

At Cal U and Waynesburg, Larsen-Reidy works with Capuchin Father Al Carver in coordinating Masses, service projects and Festivals of Praise. Dividing her time between three colleges is a challenge that she welcomes.

“Young people are yearning for the faith but often don’t realize it,” Larsen-Reidy said. “They have a desire to be joyful and at peace, but there’s just so much noise.”

“Our culture tells us that being faith-filled isn’t cool, and a lot of people think of Catholicism as being strict in following rules,” said Marybeth Cocchi, a junior from Mt. Lebanon who is studying nursing at Waynesburg University. “But it’s really about relationship and intimacy with Christ.

“My Christian friends have challenged me to delve more into my faith,” she added. “It’s positive peer pressure. They encourage me, and ask if we can pray together.”

“When our faith is lived out in its vibrancy, it’s contagious,” said Father Dan Waruszewski, co-chaplain at Washington & Jefferson. “Students often are distracted by technology and materialism as our culture turns away from virtue.”

After graduation, Sherony wants to find a parish where other young adults are excited about their faith.

“We need opportunities to get involved and to be welcomed,” she said.