Amanda Filotei, 16, admitted that her life had gotten too busy. She didn’t always make time for God. Joining a new youth group helped to get her priorities straight.

“I’ve learned that no matter what, God is always there for you,” she said. “I’m looking forward to growing closer to Him so I don’t stray again.”

Amanda and her twin sister Emily from St. Angela Merici Parish are among more than 50 teens taking part in a revitalized youth ministry program in the McKeesport area which includes the parishes of Corpus Christi, St. Patrick and St. Robert Bellarmine.

Sacrificial gifts to Our Campaign for The Church Alive! helped to fund a grant for the ministry.

“Youth group has been an eye-opening experience,” said Emily Filotei, who, like her sister, is a junior at McKeesport High School. “There are so many other kids just like me who want to strengthen their faith.”

“If we bring the young people together, everyone else will follow,” Belchick said. “They’re making new friends and their parents are starting to get to know one another.”

The teens take part in three week sessions at each of the parishes. They’ve played glow-in-the-dark dodge ball, tossed pancakes, and learned line dancing. Most importantly, they are deepening their faith.

“I have a relationship with Jesus that is growing,” said Dominic Oto, 17, a member of St. Robert Bellarmine Parish and a junior at East Allegheny Junior/Senior High School. “I want to live in God’s grace all the time.”

“It’s so critical to get our youth fired up about Jesus and the church,” said Father Terry O’Connor, administrator of the parishes. “We have to be able to reach them where they’re at and give them what their heart is seeking—a relationship with Jesus.”

“They see me as someone who can relate well to them,” said Siroky, a member of St. Angela Merici Parish. “A few kids are starting to bring friends from other denominations, so they’re also evangelizing.”

“They are helping me to grow in my faith,” said Bach, who appreciated the discipleship training he received through the diocese’s On Fire! spiritual formation program, also funded through the Church Alive campaign.

Father Joe Beck, the parish chaplain, said he found the youth group’s interactive Stations of the Cross held at St. Angela Merici to be a prayerful, moving experience.

Belchick is looking to recruit “prayer warriors” to support the youth. Father O’Connor is planning to revamp the parishes’ faith formation programs, offering family catechesis in the younger grades.

“It’s great to see the kids at church,” Father O’Connor said. “They’re excited about coming to youth group, and finding peace, hope and mission in their lives.” 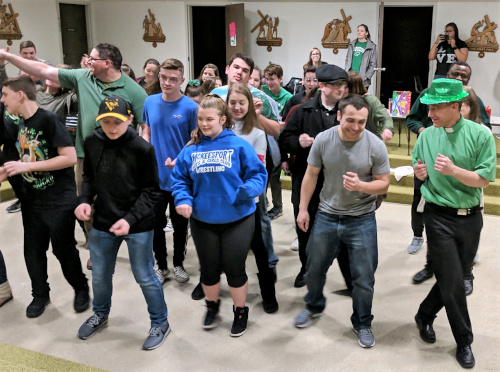