Nearly a century after celebrating their first Mass in a meeting hall and changing worship sites in recent years due to rapid growth, St. Kilian Parish again will have a church to call their own.

Groundbreaking was held July 4 for a new church located next to the St. Kilian grade school and parish center in Cranberry Township.  Plans call for completion in about 18 months, in time to mark the parish centennial in 2017.

Sacrificial gifts to the parish campaign are making a decades-long dream come true. The ongoing drive, part of Our Campaign for The Church Alive!, also helped retire debt from construction of the school.

In recent years, Mass has been celebrated in the grade school gym and at Cardinal Wuerl North Catholic High School.

“For us, a new church will mean coming home,” said Father Charles Bober, longtime pastor of St. Kilian. “It will be a home where the Lord will dwell and we will gather to worship God. It will be where children are baptized and confirmed, where couples marry and we bid farewell to our loved ones who have died.”

The focus is on functionality, featuring 1,150 seats, an elevator to a lower hall, kitchen, meeting rooms and offices.

“We also want to use sacred objects from former churches in our diocese,” Father Bober said. “People will be able to see stained glass windows, statues and altar pieces, and say, ‘I remember those.’”

A Century of Service

St. Kilian Parish began as a mission church with 85 members who celebrated that first Mass on March 18, 1917.

In 1920, the congregation purchased an abandoned Free Methodist Church. The building was remodeled many times and enlarged, rebuilt after a fire in 1934.

The recent expansion came after St. Kilian’s boundaries were redrawn in 2001 in response to the population boom in northern Allegheny and southern Butler counties. Father Bober believes the reconfiguration was the right strategic decision.

“This is an area where the Church is growing,” Father Bober said.

Seven Masses are celebrated every weekend; two on Saturday evenings and five on Sundays.

To prepare for the growth, St. Kilian Parish embarked on a master plan for 32 acres that include the current parish center and school, a renovated rectory, maintenance building and a new church.

“I’m not sure we’ve been through the desert or across the Red Sea, but a lot of people feel this church represents the Promised Land,” Father Bober said. “It’s important to us to worship in a church that’s our own.” 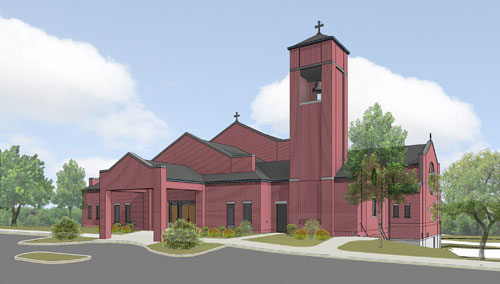 An artist's rendering of the future St. Kilian church