HEARING THE CALL AT DEPAUL SCHOOL

“It was hard,” Tracy said. “You always have expectations for your children. You want them to be healthy. So at first it was a grieving process.”

But Tracy and her husband Justin Craig, of New Castle, discovered the DePaul School for Hearing and Speech, located in Pittsburgh’s Shadyside neighborhood. They enrolled Kelly and later Audrey in their toddler program, helping them to listen and speak without using sign language. Today, at ages seven and three, both girls are thriving.

The DePaul School for Hearing and Speech has been awarded a grant from Our Campaign for The Church Alive! to provide need-based scholarship support for students in the toddler and upper elementary programs. The funds will create a matching pool for corporate and individual gifts and to help launch a planned giving society.

“Some families have so many needs and medical expenses that they cannot pay anything toward their tuition,” said Ruth Auld, Ph.D., executive director of DePaul School. “Children become eligible for a state subsidy at age three, but they begin to form words at 15 to 18 months. It’s a critical time period for language development.”

Many hearing impaired children are fitted with cochlear implants—small, electronic devices that replace the function of the damaged inner ear to provide sound signals to the brain. DePaul’s programs help children learn to use the device effectively as they listen, speak and learn.

Like the Craig girls, John Sopczynski, Jr. received cochlear implants as a toddler and learned to lip read at DePaul School until he was mainstreamed at St. Joan of Arc and St. Louise de Marillac parish schools in the South Hills of Pittsburgh. This spring, he will graduate from Penn State with a degree in electrical engineering and already has a job lined up.

“The teachers at DePaul are very caring and attentive,” Sopczynski said. “I would not be where I am today without DePaul being there for me when I was younger.”

Founded in 1908 by the Diocese of Pittsburgh and the Sisters of Charity of Seton Hill, DePaul is the only Listening and Spoken Language school in the western Pennsylvania, Ohio and West Virginia tri-state area. For more than a century its goal has remained the same—to prepare each student for success in the hearing and speaking world.

Sister Francis Louise, age 101, taught at DePaul School for 60 years, retiring in 1997. She and the students are pen pals.

“The teachers continue to do wonderful work with these children,” Sister Francis said, before pausing to belt out a chorus of “Somewhere Over The Rainbow,” which she first sang to DePaul students in the 1940s. “They loved to hear me sing, wearing their headphones.”

Audrey Craig has graduated from the toddler program and is preparing to follow her sister into the Mohawk Area School District in Lawrence County. Their mother offers thanks to campaign donors, along with other DePaul parents, staff and board members.

“Thank you to all who support the Church Alive campaign,” Auld said. “You are helping us carry forth our mission that began with the diocese and the Sisters of Charity of Seton Hill, giving opportunities to the underserved.” 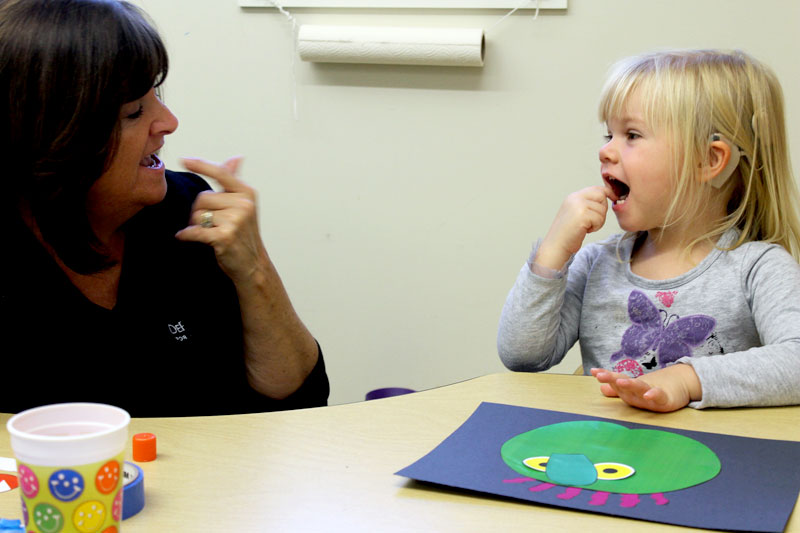 The teachers continue to do wonderful work with these children