A ‘MESSY MINISTRY’ THAT CONNECTS WITH KIDS

At first glance, Mayhew looks like any typical teenager. The 17 year old lives with his mother and sisters in Pittsburgh’s Garfield neighborhood and dreams of becoming a veterinarian.

He’s also left his high school because one of his sisters allegedly was assaulted there. Mayhew says a few friends also have been victims of violence. On Christmas Eve, a young man was gunned down on a Garfield street.

But Mayhew sees a brighter future thanks in part to Dirty Vagabond Ministries, an urban youth ministry that embraces Pope Francis’s preference for “a Church that is dirty because it’s been on the streets.”  Missionaries are considered to be “vagabonds” who work with kids who are poor and in need of hope.

Teens have been hanging out at the Underground, a new youth center at St. Maria Goretti Parish in Garfield/Bloomfield/Friendship. The program, which also includes community activities, tutoring and scripture study, recently received a start-up grant from Our Campaign for The Church Alive!

“We get help with homework, play games and meet different kids,” Mayhew said. “We also talk about the Bible and what we want to do in life.”

“I knew I wanted to serve the Church and go into urban ministry,” said Bonessi, who was a member of St. Louise de Marillac Parish. “These kids have to grow up too fast and they experience so much instability, first living with their mom, then dad, then other relatives.”

“I have not yet met one kid in Garfield who comes from a two-parent home,” Kerfoot said. “They live in fear of violence. Even the ones who behave and do well in school have a lot of pain, anger and confusion.”

Dirty Vagabond Ministries was founded by Bob Lesnefsky, who says that loving the poor is something profoundly concrete.

“It’s also a messy ministry because there’s so much disorder in these kids’ lives,” Lesnefsky said. “We can tell them, ‘you’ve got to stop sleeping with your boyfriend,’ or ‘stop drinking,’ but they’ll say, ‘I tried, but then I smoked weed or did meth with my mom.’”

Father Regis Farmer, pastor of St. Maria Goretti Parish, worked in youth ministry and knows how to connect with kids.

“Christopher plays basketball with the kids, and he and Emily tutor in the public high schools and invite the youth to their gatherings.

“The next step is to engage them in the Church, but it takes time to first build relationships.”

Parishioner Jim Herrle supports the ministry as a volunteer. “We need to get the Christian message out to the young folks,” Herrle said. “Working with them also helps our parishioners become more vibrant in their faith.”

Back at the Underground, located at the St. Lawrence O’Toole church site on Penn Avenue in Garfield, Mayhew is thanking Bonessi for taking them bowling, ice skating, and to a weekend retreat in the Laurel Highlands.

“I had never been on a retreat,” Mayhew recalled. “We read the Bible and talked about the Resurrection, and also had fun playing laser tag.”

Bonessi and Kerfoot began their ministry in August, handing out free hot dogs and literally walking the streets, talking to kids at bus stops, in neighborhood playgrounds and parks. They also tutor at local high schools, and have been assisted by the police.

“Shortly after we arrived one officer drove us around the city, pointing out some areas and streets that aren’t so good,” Bonessi said. “We’re trying to create a space where youth can be safe, have fun and just be kids.”

Lesnefsky, who’s also a Christian hip hop artist and speaker, uses rap music to reach out to teens in all walks of life. Other missions are located in Steubenville, OH, and Greenville, NC.

“When we approach kids, we don’t say, ‘Do you know Jesus?’” Lesnefsky said. “We first want to be seen.”

“There’s always a bit of surprise when we meet them,” Kerfoot said. “Some are open to talking to someone who calls themselves a youth minister, and others are really skeptical. That’s why it’s important for us to become part of the community and establish some trust.

“We hope to make an impression that reaches into the schools,” Kerfoot added. “We hope that teen pregnancy in Garfield goes down. We hope they have higher dreams, and experience Christ. Life may seem boring for a lot of kids. They don’t know about the adventure that is the Christian life.”

Herrle recalls the words of Bishop David Zubik in his pastoral letter, The Church Evangelizing.

“Be a friend. Be a friend of Jesus. Make friends for Jesus.” 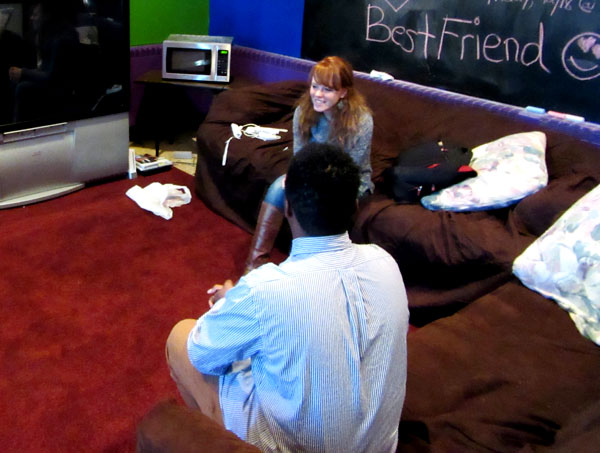 Missionary Emily Bonessi meets with Mayhew, one of the youths participating in the Dirty Vagabonds urban ministry outreach at St. Maria Goretti Parish.

Street ministry involves reaching out the old fashioned way, one young person at a time