Father John Marcucci’s parishioners are seeing the light—literally and figuratively—as they live out the principles of good Christian Stewardship.

The longtime pastor of St. Mary of the Assumption Parish in Glenshaw points to new, energy-efficient lighting in the church as an example of using sacrificial gifts wisely through Our Campaign for The Church Alive!

Before the campaign began in the parish nearly two years ago, leaders formed a team and organized seven forums were held to get the input of parishioners. Nearly 150 ideas were suggested and collected into five “baskets”—Church & Liturgy, Educational Developments, I.T. Enhancements, Endowments, and Evangelization/Outreach.

“The same eight people who started the campaign created the parish case statement and then reached out to parishioners for support,” Father Marcucci said. “They are now ensuring the funds are spent according to the forums that we held.”

“We asked all of our parishioners to tell us what their ideas were, what their hopes and dreams were for the parish,” said Dr. Patricia Coyle, who serves on the Church Alive Team. “I think our parishioners were extremely happy to be asked. It gave them some buy-in to participate.”

“Once you create that dynamic, the person in the pew says, I get it, I’m in, I’m for it!” Father Marcucci said.

Today, the entire parish is benefiting from the fruits of this labor. Funds have been invested in youth ministry programs for junior high and high school students. A parish endowment has been created.

A new sound system and video recorder have been installed in the church, a handicap-accessible restroom was built in Marian Hall below the church, 44 computers have been upgraded in the parish school, and the Wi-Fi system is being expanded to the entire campus to help improve access to catechesis programs. Many other improvements are planned.

Founded in 1834 by German settlers, St. Mary of the Assumption Parish was born in a log cabin. Later the first church was built, which lasted more than a century until the current church was constructed in 1964.  The school opened in 1847, and is the longest-running Catholic school attached to the same parish in the diocese, according to Father Marcucci.

“Our population just exploded in the 1960s and ‘70s and we expanded from about 400 families at one time to 2,400 families today,” Father Marcucci said.

It’s an active parish where the faithful are growing in Christian Stewardship through the campaign.

“We’re stewards of their ideas, their experience, their wishes, their hopes, their dreams, their resources,” Dr. Coyle said.

“On a personal level, I believe I have to be a stewasrd of the gifts that God has given to me—certain talents that I have to humbly recognize, and then use them to serve the people of the world and to serve God,” she added.

“For each of us to be a better steward, I would think it’s a prayerful acceptance of the gifts that God has given us, and an awareness of the needs around us,” Father Marcucci said. “You readily accept the command of the Lord. You are grateful that God has blessed you, your family and your parish in so many ways.

“I think the people here understand that. They are blessed in many ways and realize their blessings come from God and they’re willing to share them with others because they’re grateful for it in the first place,” Father Marcucci said.

The response so far to the improvements has been dramatic.

“With the lighting and the sound system, people are amazed,” Father Marcucci said. “They can read and hear the Word of God better. Our young people are appreciative of their programs. There’s been a great impact.”

To see a video on St. Mary of the Assumption’s stewardship efforts, click here. 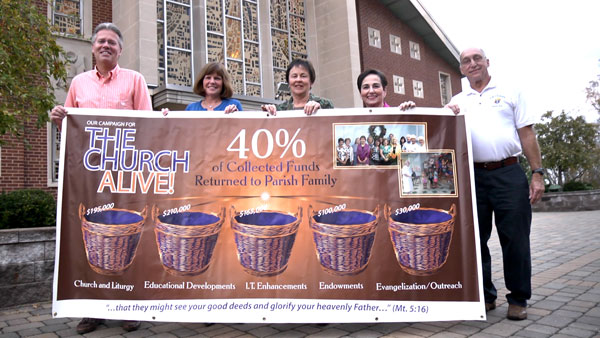 “For each of us to be a better steward, I would think it’s a prayerful acceptance of the gifts that God has given us, and an awareness of the needs around us,”