SPIRITUAL SIDE OF GIVING

Father Jim Farnan remembers when he was growing up that his dad always dreamed of owning a Cadillac. But with seven children, providing for them was far more important than anything material. The kids went to college. His father never bought that Cadillac.

“But he enjoyed a peace and sense of satisfaction that he never sacrificed his children’s welfare,” Father Farnan said. “He always chose what was most important.”

The pastor of St. Thomas More Parish in Bethel Park understands how such priorities, rooted in Scripture, help nurture the spirit of Our Campaign for The Church Alive!

Father Farnan asked one prosperous parishioner to support the campaign. His response was memorable—he simply said that wealth is a great responsibility and the Lord wants to see how he’ll use it, so he gave enthusiastically.

After taking up a collection from the Gentiles and giving it to the poor Jews in Jerusalem, St. Paul wrote in 2 Corinthians 8:7, “But since you excel in everything…see that you also excel in this grace of giving.”

For many of us, that’s reason enough to share our blessings—the Bible tells us to give.

Father John Marcucci, pastor of St. Mary of the Assumption in Glenshaw, reflects on 1 Chronicles 29:11, “Everything in heaven and earth is yours.”

“The first book of Chronicles dates back to when Solomon was building the temple for his own power and prestige and the people were bringing offerings as part of their prayer,” Father Marcucci said. “David stood before the temple and reminded Solomon that we’re not here to build our own temples—we’re all called to build the kingdom.

“So many donors said to me, ‘let’s not make a big deal of what we’re giving here—don’t put our name in lights. This is what we need to do,’” Father Marcucci said. “It was their way of saying, ‘we’re all in this together.’”

“You have to look at the spiritual side of giving,” said Father Bob Vular, pastor of St. Teresa of Avila Parish in Perrysville. “Many who are giving know that everything they have and everything they are is a gift from God. And we are called to return those gifts to Him.”

“People recognize the face of Jesus in our brothers and sisters and realize that we’re all called to care for each other,” Father Vular said.

Acts 20:35 offer another compelling reason to share what we have; “It is more blessed to give than to receive.”

“Giving is good for us,” Father Vular said.

Father Marcucci offers an insight into Romans 12:13, “Share with the Lord’s people who are in need.”

“That’s about practicing hospitality, as Bishop Zubik describes in his pastoral letter on Evangelization,” Father Marcucci said. “St. Paul was telling the wealthy Romans to open their homes and hearts to the poor.”

“What keeps coming back to me is the promise of Christ—whatever we give to Him, He gives back,” Father Farnan said. “It’s exemplified in the Eucharist. We give the bread of life, the cup of salvation, and He returns those gifts.

“Look at the offertory during Mass,” Father Farnan said. “Besides putting money in the basket, you should take everything you did that week that was sacrificial—like showing patience with your children or being kind to someone who didn’t necessarily deserve it—and offering it to God.

“The campaign is about educating people about God’s generous love and making their gifts sacramental. God will return them to us in a grace-filled, eternal way.”

Father Vular sums it up.

“God can never be outdone in generosity.” 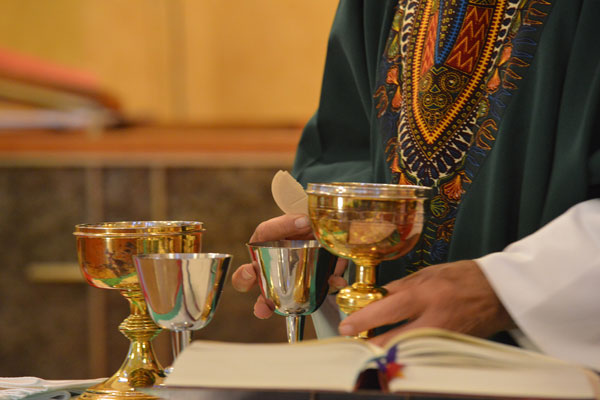 “God can never be outdone in generosity.”