When the members of four neighboring parishes were challenged to work together with their clergy to revitalize Catholic ministry in their aging communities, they knew they would need assistance.

A grant from the non-profit volunteer board of Our Campaign for the Church Alive!, Inc. will help support pastoral ministry and community building at St. Basil and St. Wendelin in Pittsburgh’s Carrick neighborhood, St. Norbert in Overbrook and St. Albert the Great in Baldwin. The parishes are served by two priests, three deacons and a pastoral associate.

The grant will act as a bridge until enough donations are received from the four parishes, which ran their campaign last fall.

“A top priority is making sure our homebound members feel connected to their parish,” said Father Steve Kresak, pastor of the four parishes now called the Catholic Community of South Pittsburgh.

Mary Swindal, who joined the ministry team as pastoral associate in July 2014, says a new Senior Outreach Committee has undertaken a telephone survey of parishioners.

“Out of about 4,000 total households we have 662 parishioners in their 80s, and 226 seniors who are age 90 or older,” Swindal said. “We ask about their sacramental needs, such as Holy Communion, reconciliation and anointing of the sick.

“Our committee is made up of people from all of our parishes, and they are eager to be part of this outreach,” she said.

For the first time, volunteers from the four parishes this summer collectively planned one parish picnic.

“Well over 500 people attended. It was great to see people coming together and meeting new friends,” Swindal said. “We want to honor each parish’s traditions and individuality, but there’s such energy in doing things together.”

The parishes still face significant issues. Weekend Mass attendance had fallen 41 percent over the past decade to just 1,900 last year, while church buildings are projected to need $2.3 million in repairs within five years.

A reduction in the number of Masses was difficult but necessary. This summer, brawling among groups of neighborhood youth forced the cancellation of St. Basil’s parish festival.

But in announcing new leadership and his vision for collaboration in February 2014, Bishop David Zubik pointed to a history of shared ministries, the fact that the churches that are within two miles of each other and most members live within the parish boundaries.

Swindal serves as a liaison between parish organizations and the priests, working with extraordinary ministers of Holy Communion, the Ladies of Charity, Christian Mothers. She also coordinates with the Area Agency on Aging, Catholic Charities and helps connect people who knock on the rectory door with community resources.

The staff of the four parishes now look at themselves as one team, according to Father Kresak, and they’re continuing to seek ways to work more efficiently and effectively.

“People have been supporting each other, helping at other parish festivals and fish fries,” Swindal said. “They have a strong sense of what we share, instead of just how we’re different.

“It’s fun to see new friendships form,” Swindal added. “They chip in where they can. People really want to make this work.” 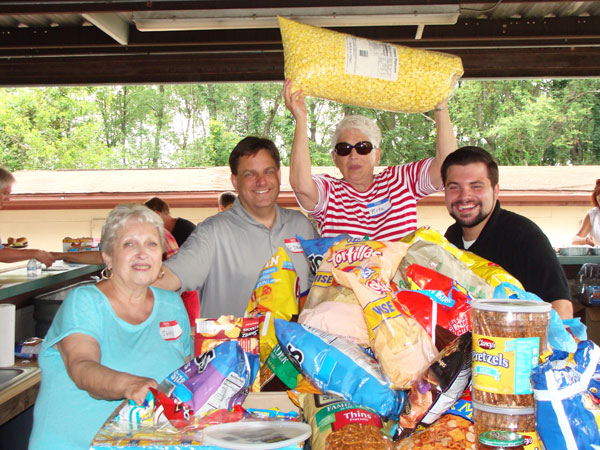 “Our committee is made up of people from all of our parishes, and they are eager to be part of this outreach.”