Urges the Faithful ‘to continue to be excited about our faith’

Catholics and clergy across the six counties of the Diocese of Pittsburgh have responded overwhelmingly to an historic campaign to strengthen parishes and evangelize, Bishop David A. Zubik announced today.

Parishioners were invited to take part in the campaign to help invigorate evangelization, revitalize sacramental life, support education, train clergy and lay leaders, and to serve the poor and marginalized. The financial goal of the campaign was $125 million. Additional funds will be used for these extraordinary parish and diocesan-wide needs.

“When I was installed as Bishop of Pittsburgh on September 28, 2007, I asked one question of everyone, starting with myself: ‘How excited are we about our faith?’” Bishop Zubik said. “I have been heartened by what I have seen and heard. Our people are excited, and have demonstrated that with their sacrifices.”

Bishop Zubik announced the campaign on Dec. 16, 2012, asking parishioners to prayerfully consider pledging sacrificial gifts over five years to support the work of the Church.

Thanks to these donations, well over 70 percent of campaign funds will directly or indirectly benefit parishes. The initial target was $50 million for parishes; they are now anticipated to receive approximately $96 million.

Diocesan-wide programs and ministries will receive about $15 million more than the original target of $75 million.

In addition to strengthening parishes, the campaign supports 17 priorities across the diocese, including evangelization, need-based tuition grants for children in Catholic elementary and secondary schools, religious education, seminarian formation, support for retired and senior priests, Catholic Charities Free Health Care Center, and our brothers and sisters in the missions.

None of the funds are designated for regular operating expenses of parishes or the diocese.

The clergy led by example, personally donating nearly $4 million on a target of $500,000, while also visiting with parishioners to ask for gifts and recruiting campaign volunteers.

“The people who served as our campaign volunteers didn’t learn to be fundraisers; they became evangelizers who called others to put their treasure where their heart is,” Bishop Zubik said.

To ensure the diocesan-wide priorities are followed, a separate non-profit corporation and volunteer board of directors was created to manage and oversee the campaign funds and make grants based solely on the components in the diocesan case for support.

The board already has awarded nearly $9 million for diocesan-wide priorities such as expanding dental services at the Catholic Charities Free Health Care Center, improving outreach to families of students with special needs, and encouraging vocations to the priesthood. Parishes have received $13 million to date to fund their local priorities.

The campaign not only is raising much-needed resources, it has raised awareness of the great need for evangelization, the costs involved with carrying out ministry, and awakened a spirit of sacrifice and service that will benefit the church long after the final pledge is received in 2019.

The success of the campaign does not mean the Church is without economic challenges. There are a number of parishes in areas that have seen a large decline in population and are struggling financially. While campaign monies cannot be used for regular operating expenses, the funds are helping many parishes pay for long-deferred maintenance projects and evangelization and pastoral outreach to bring people to Jesus and strengthen the parish.

“I rejoice in the tremendous commitment to living and spreading the gospel that these gifts represent,” Bishop Zubik said. “It shows that our people love their faith and are willing to make sacrifices for it.

“Now that we are aware of how much God has blessed us in this campaign, the question we must now ask is ‘what is the next step that God wants each of us to take’? The answer: to continue to be excited about our faith,” Bishop Zubik said. 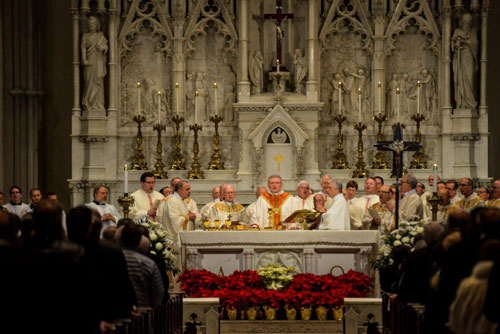 “I rejoice in the tremendous commitment to living and spreading the gospel that these gifts represent,”